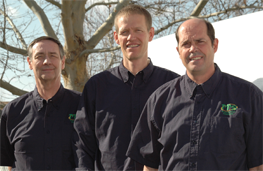 In 2002, the Harrison family completed building a cabin in the mountains of Central Utah. They used a generator for a couple of years, but didn’t like the smell of gas, the noise, and the inconvenience. They contacted Rocky Mountain Power to see what it would cost to bring in electricity — over $100,000!

Cecil Harrison, an electronics engineer, explains “The area where we have our cabin is all average working families and the cost to bring in power was more than any of us could afford. I started doing the research, and realized the solar was a viable alternative. It took Norm and I a year to get up-to-speed on all the aspects of the technology, and a weekend to install the system.”

Norm, now PPS CEO, explains how the company came into being. “Our solar system worked so well, we had people  asking us how we did it. We realized most people did not have the expertise to do it themselves. Cecil and I had already been through the process, so we founded PPS in 2006. We started out in the cabin and off grid market and have worked the company up to where it is today.”

Not long after PPS was founded, Rob Reeves, a long-time friend and Master Electrician, joined PPS.  The rest, as they say, is history.

Every PPS customer, residential or commercial, becomes part of the PPS solar family.

Dedicated to the Lifestyle & Solar Experts

PPS has more than ten years of solar engineering, design and installation experience. They pride themselves as experts in Utah power saving solutions. All customers receive a discussion of the economics of their solar systems, including residential and commercial rate structures, tax credits, incentives, and return-on-investment.

Depending on system size, PPS customers have saved 75% or more off their electric bill from day one of installation. All customers regularly achieve 35-45% system cost reductions (more for commercial) by maxing out available tax credits, rebates, and other incentives.

A NABCEP certified design engineer reviews every job and will design your solar energy system to meet your needs. We have licensed electricians with years of experience in off-grid, grid interactive, and back-up systems. Progressive Power is experienced and can build systems from single panel to megawatt production plants.

Experienced staff members will help you with submitting all necessary paperwork (I.E taxes, rebates, etc.). Progressive Power has licensed maintenance crews that are just a phone call away. Our commitment to all of our customers is to only use high quality warranted parts and skilled workers on each system. Progressive Power will stand between our product and ensure the highest quality product on the market today.