From Light to Electricity: What is Solar Power?

Written by ppsadmin on November 6, 2015. Posted in Uncategorized 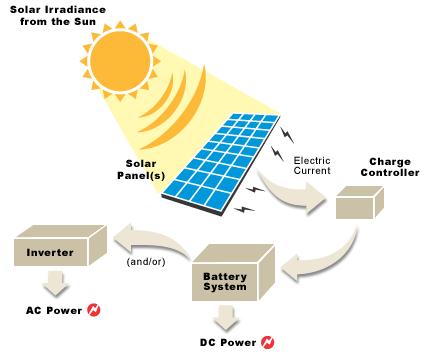 If you’re like many homeowners, you’ve probably heard about solar panels, or even seen them on a handful of houses in your community. You’re likely wondering what all the fuss is about, and if solar power delivers on its promises. What is solar power, and how does it work? Is it cost effective? Is it something you should be looking into for your home or business?

The answer to all of these questions depends on your specific situation, of course, but the basics of solar power are simple. Solar power is merely a process of taking the energy that the sun generates and harnessing that power into a form that can be used in homes and commercial buildings anywhere. This is done with the use of solar panels.

Solar panels are made up of smaller units called photovoltaic cells. Each cell is made up of layers of silicon – an electric semi-conductor – and different elements that create a positive and negative charge within the cell. Together, these cells generate enough of an electric field to be transferred through metal plates and wires into your home or office. Like most sources of electricity, solar power then requires a DC to AC converter, to move it from a battery-like state to something you can plug your appliances into.

Installing enough solar panels to replace a significant portion of other power sources such as water or coal energy can be expensive upfront. However, the process is getting more affordable daily. Thanks to subsidies from the government, installing panels is much less pricy than it used to be. The only fuel required to run solar panels is the sun, which is free for anyone to use. Solar panels also require minimal maintenance and cost almost nothing to operate. All of this means that it is likely that you will see a return on your investment within several years. Over the course of a lifetime, solar panels can actually save you money!

To find out if solar panels might be a good investment for you, you need to evaluate the cost savings over a substantial period of time. Progressive power can help you crunch the numbers, but here’s a place to start. In Utah, an average electrical customer will pay around $.12/kilowatt hour (kwh) for their power usage. A good-sized single family home can likely generate 10,000 kwhs in a year. Therefore, that family would save $1,200 on their power bill in that year. That savings could potentially pay for the cost of a single solar panel – before government subsidies are taken into account. The power estimate we used in this example requires about 20 panels to produce, so that family would have paid for their system in full in 20 years, which is less time than a standard 30-year mortgage! And remember, that is without the help of government subsidies and tax breaks. So the average customer will pay off their system in roughly half of that time. Some people may even realistically generate enough power to begin earning back their investment in as few as six years. It all depends on the size of your home, how much direct sunlight you receive, and the cost of power in your area.

There are fringe benefits beyond cost, as well. Solar power produces no waste, so it has little impact on the environment. Additionally, for the foreseeable future the sun is not likely to “run out.” So investing in solar power today can protect you from the inflation of fossil fuel prices and the possibility that other sources may become unreliable in the future.